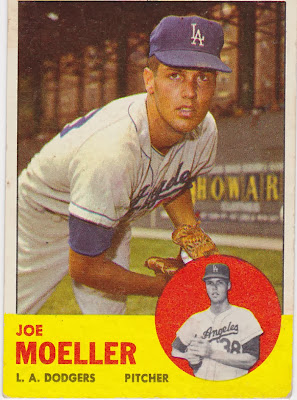 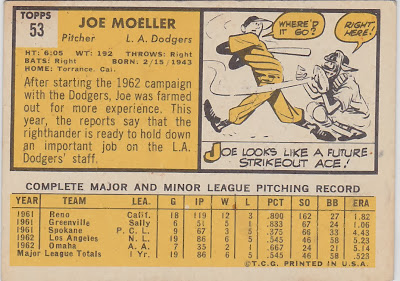 The Polo Grounds on Coogan's Bluff at the north end of Manhattan makes for a wonderful baseball card background. Here on Joe Moeller's card we can see the apartment buildings on what I believe to be 159th Street through the openings in the back walls of the grandstands and the Howard Clothing sign that was down the left field line. If a player hit that sign he won 'points' towards some big prize at year's end. A car or a boat as I recall.

Anyway we are here to discuss Joe Moeller. The righty flamethrower signed as a seventeen year old with the Dodgers in 1960. In 1961 he put in a year of minor league service winning a total of 20 games with three clubs and put up impressive numbers overall. He made the Dodgers' staff in 1962 and found himself overmatched. In July his 5.25 ERA and his wildness earned him a trip back to the minors. He spent '63 winning 16 games at the AAA level and by 1964 he was back for another shot at the big leagues.

His walk totals had improved in '64 but his 7-13 record combined with a Dodger staff good enough to win the NL kept Moeller in the minors in '65. He came up again in 1966 and worked out of the bullpen. He was the guy who relieved Don Drysdale in Game One of the 1966 Series against the Orioles. He pitched two innings in that game and says it was the highlight of his career.

His roller coaster career continues as he bounced back and fourth between the Dodgers and their minor league clubs for two seasons. Interestingly he appears in the 1968 Topps set as a member of the Houston Astros. Moeller had been selected by them from the Dodgers in the Rule V draft in November of 1967 but was returned to the Dodgers prior to Opening Day of '68.

Finally, in 1969 he found a place in the Dodger bullpen and worked three respectable seasons there. He finished his career with a couple of seasons in the Padres' chain. His major league totals show a record of 26-36 with a career ERA a touch over four.

Moeller works as advance scout for the Miami Marlins. In the video below he talks to baseball campers about his career, pitching in the World Series, opponents and teammates and baseball in general.

Posted by Commishbob at 9:33 PM