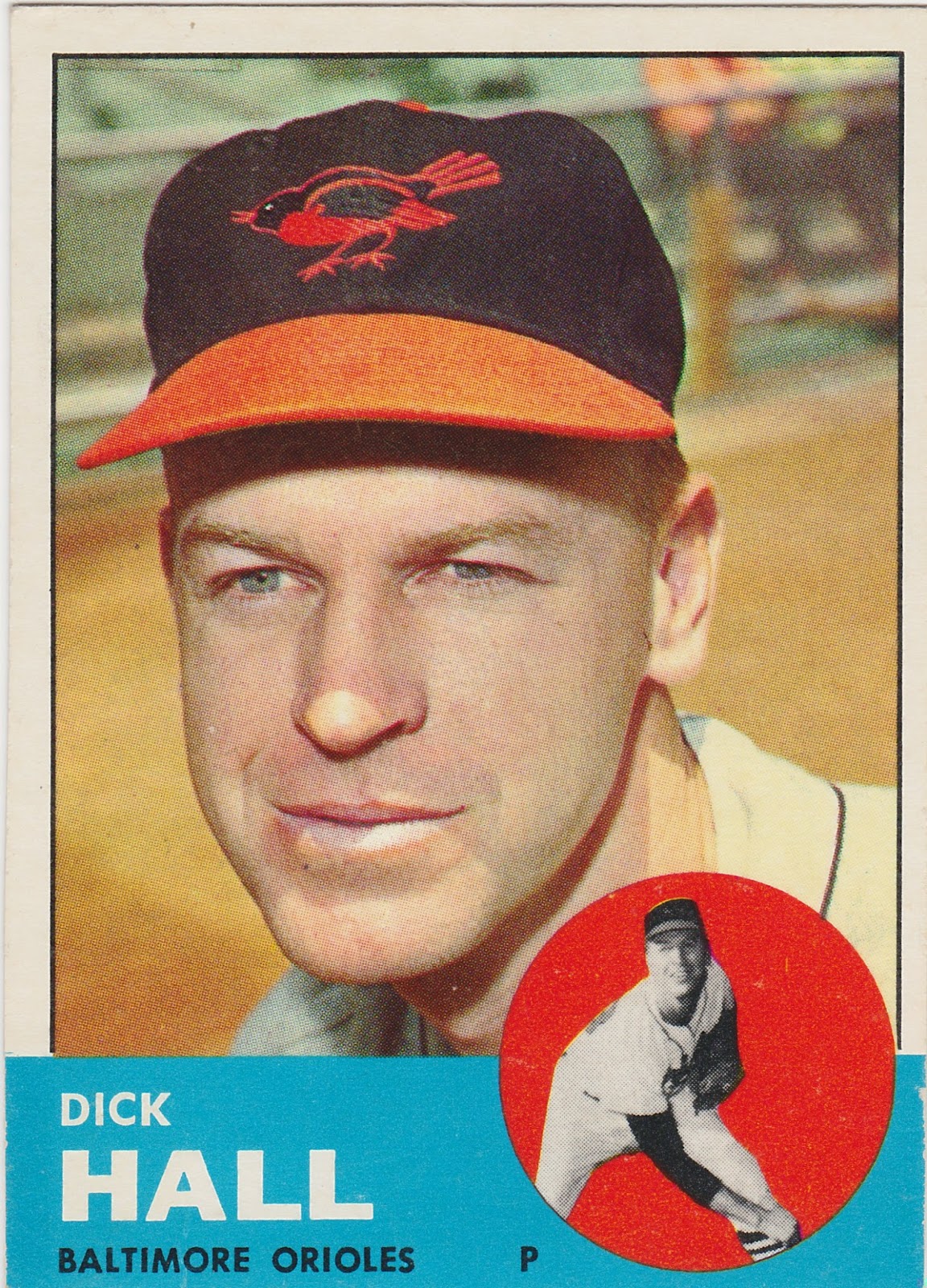 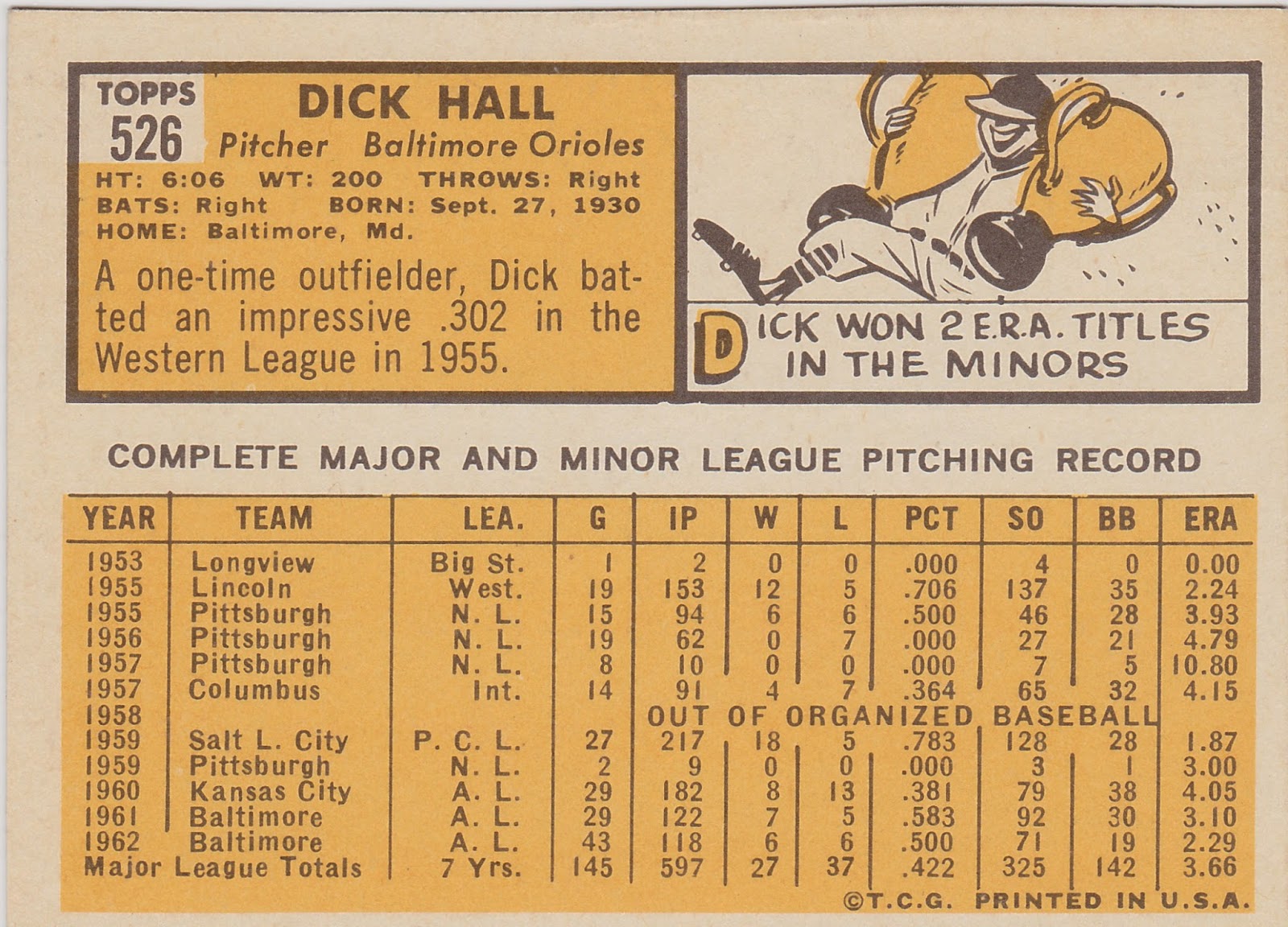 One of the unsung heroes of the great Orioles teams of the 60's and early '70s, relief pitcher Dick Hall actually began his career as a light hitting outfielder in the Pirates chain in 1952. He was a semi-regular patrolling the Forbes Field outfield in 1954 but he spent the next two seasons transitioning into a pitching role. The Pirates had already tried to find him a home as an infielder when his hitting didn't support his taking up an outfield spot.

On the mound beginning in 1955 Hall pitched in all or part of four seasons going 6-13. Hall was obviously just learning his craft in those days and looking at his numbers confirms this. His 1959 season in the minors showed he'd adapted well (18 wins) and after a trade to Kansas City he had a respectable year in the A.L.

A trade to the Orioles for '61 really paid off for Hall (and the O's) He started 13 games that season and pitched well but his career blossomed when he moved to the bullpen full-time in 1962. Over the course of the next five years he went 44-26 with 44 saves. He won a World Series ring in '66 although he never left the bullpen during the Orioles four game sweep.

Traded to Philadelphia after the '66 Series he pitched two years there before the Phils released him. He re-signed with the Orioles and proved he had something left as he was a part of three Orioles AL championship clubs through 1971. After establishing himself as a pitched he showed great control. According to Baseball Reference in his last 7 seasons, he issued only 23 unintentional walks in 462 innings. He threw only one wild pitch in his entire

In addition to another World Series ring Hall had the honor of winning the very first American League playoff game. I was there in 1969 as the O's beat the Twins in 12 innings on their way to a sweep. In the top of the 12th inning that day Hall relieved Marcelino Lopez with the bases loaded and one out. He fanned Leo Cardenas and got Johnny Roseboro to fly out to kill the threat. The Orioles won with a squeeze bunt by Paul Blair in the bottom of that inning.

In five postseason games, all with Baltimore Hall had a pair of wins and as many saves. He also had a single in three at bats showing he hadn't forgotten his days as a position player. After he retired Hall worked as a CPA. In this Baltimore Sun interview from 2009 Hall discusses how his usual pitching delivery led to his unusual nickname of 'Turkey' and his post career life.

Bob was signed by the Washington Senators in 1949, and played in the minors for 4 seasons before making his major-league debut in April 1953. Bob only played in 7 games with the Sens that year, and spent most of the season in the minors.

He was with the big club for all of 1954, but as the 3rd-string catcher only played in 11 games, and did not play at all from mid-June to mid-August. He began the ’55 season with the Senators, but was sent down in early June, having only played in 6 games. 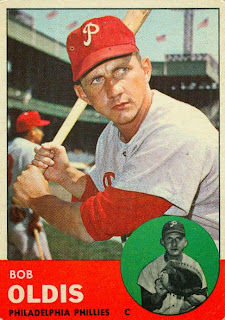 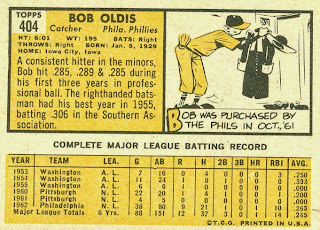 After the ’59 season, he was selected by the Pirates in the Rule 5 draft, and was the Bucs’ 3rd-string catcher in 1960, behind Smoky Burgess and Hal Smith. He played in 22 games during the season, and was a defensive replacement in 2 games in the World Series, although he did not have any plate appearances. Bob was back in triple-A for most of 1961, then was sold to the Phillies after the season.

His final 2 seasons (at age 34 and 35) was where he saw the most playing time of his career. In 1962 he caught 30 games (23 starts) as the 3rd-stringer behind Clay Dalrymple. In 1963 he finally advanced to the #2 catcher’s slot, catching in 43 games (19 starts) behind Dalrymple and ahead of ex-Angels’ backstop Earl Averill.