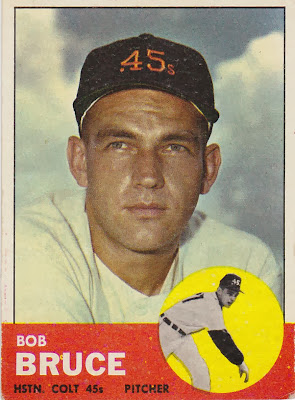 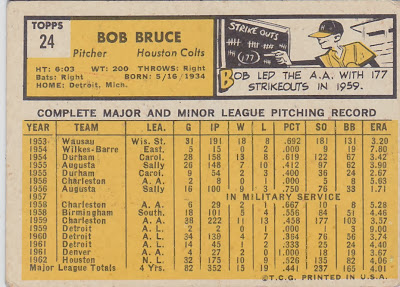 Bob Bruce signed with the Detroit Tigers in 1953. The righty pitcher took a long slow trip up the Tigers' minor league ladder and spent a year in the military before he finally debuted in September of 1959. His first appearance that year was a one inning mop up stint in which he walked two. He returned to the mound on September 27 making his first career start. It was against the White Sox at Briggs Stadium and Bruce was treated pretty shabbily, and not just by the Sox. Here is the Baseball Reference play-by-play for the top of the first:

So Bruce gives up a hit to Luis Aparicio, allows him to steal second and third, walks Nellie Fox, gets Jim Landis to ground to short where it's booted (or thrown away), uncorks a wild pitch, coaxes a run scoring grounder out of Big Klu, gets Johnny Romano to ground to third where it's booted (or thrown away), whiffs Al Smith, gives up a home run to Jungle Jim Rivera and finally gets out of the inning on a pop up. Jimmy Dykes pulled the plug on Bruce to start the second and with the season ending a few days later Bruce had the whole winter to re-live that nightmare inning.

Another interesting thing happened later in the same game and it had nothing to do with Bob Bruce directly. Sox manager Al Lopez replaced his entire team on the field to start to bottom of the sixth. Again, here is the BR game summary:

You don't see that happening very often. Looks like El Señor was saving his troops for the post season. His club had clinched the pennant five days earlier.

But Bob Bruce persevered and remained with the Tigers through 1961 as a reliever and spot starter. He was traded to Houston in December of 1961 and became a solid member of the Colt 45s' starting rotation in their first season. He won 42 games for the Colts/Astros in five seasons. He was the first pitcher in that franchise's history to win 15 games (1964) and he pitched in the last game played in Colt Stadium and the first game in the Astrodome. In and April 1964 game versus the Dodgers he struck out the side on 9 pitches. He became only the twelvth pitcher to do that. Amazingly he did it the next day after Sandy Koufax had become the eleventh to do it.

Bruce finished his career in 1967 with the Atlanta Braves and retired to San Antonio, Texas where he works in the real estate business.

Little Topps quirks that amuse me department: I've been in Houston since 1967 and have never seen the city's name abbreviated as 'HSTN.' except on a Topps card.
Posted by Commishbob at 7:30 AM No comments: 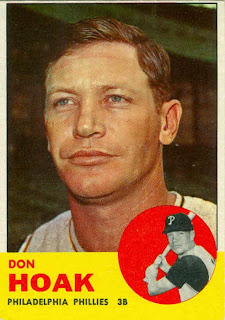 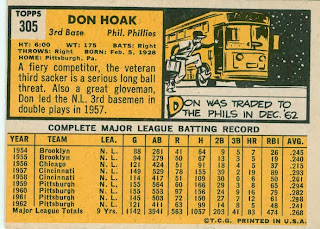