Aside from being an ex-Phillie, Sievers’ name popped up for me two other times. He was one of the last active players from the St. Louis Browns, and he was one of only 8 players to have played for both Washington Senators’ franchises. 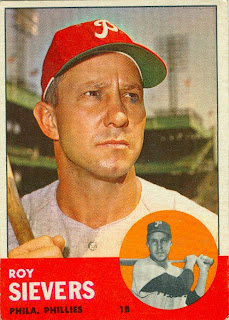 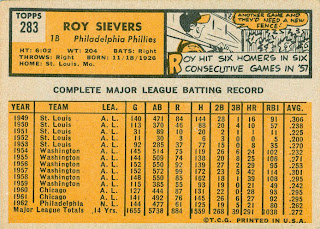 Sievers was signed by the St. Louis Browns in 1944, but didn’t begin playing until 1947. He played in their farm system from 1947 to 1948, then made his major-league debut with the Browns in April 1949. Roy was the Browns’ starting right fielder in his rookie season, batting .306 with 16 homers and 91 RBI. He also won the AL Rookie of the Year award.

In 1950, although Sievers started more games in center field than any of his teammates, he ended up with the 4th-most playing time among the outfielders. He also started 21 games at 3rd base, as the team rotated more than 5 players through the hot corner.

Shoulder injuries limited his playing time for the next few seasons. In 1951 he only played in 31 games for the Browns, having been sent to the minors in mid-June. After missing most of the 1952 season, he returned to the Browns in 1953, sharing the starting 1st base assignments with Dick Kryhoski.

1959 was his last season in Washington. Roy only played in 115 games, collecting 19 homers and 49 RBI. After the season he was traded to the White Sox for catcher Earl Battey and 1st baseman Don Mincher.

In his 2 seasons as the White Sox’ 1st baseman, Sievers was recharged, bouncing back with over 25 homers and 90 RBI each season. He also made his last of 4 all-star teams in 1961.

In November 1961, the Sox moved him to the Phillies for pitcher John Buzhardt and 3rd baseman Charley Smith. Roy was the Phils' regular 1st sacker for all of 1962 and 1963. In 1964 Sievers shared the 1st base job with rookie John Herrnstein through mid-July.

On July 16th he was sold to the (new) Washington Senators, where he was used mostly as a pinch-hitter until they released him in May 1965.

Sievers was a coach for the Reds in 1966, then managed in the minor leagues from 1967-70 for the Mets and Athletics.