Sorry for another Phillie so soon, but I just moved and I can't find the power cord to my scanner, so I'm limited to cards that I've already scanned to my computer. This means a lot of Phillies, Giants, and White Sox players until further notice.


Jack Baldschun was the star bullpen ace for the Phillies in the early 1960s. Upon leaving Philly after the 1965 season, his career flamed out.

Jack was signed by the (old) Washington Senators in 1956. He pitched 5 seasons in the minors, first as a starter, before switching to relief in 1958. The Phillies selected him from the (by then) Minnesota Twins in the Rule 5 draft after the 1960 season. 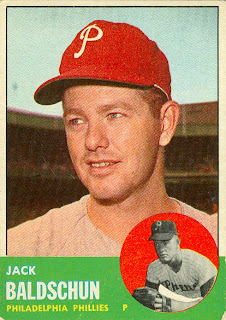 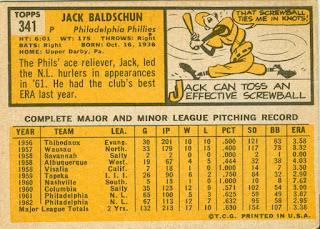 As a Rule 5 pick, Baldschun was retained on the major-league roster for the entire 1961 season. He didn't merely take up a roster spot - he appeared in 65 games (most in the NL). Jack pitched 99 innings (all in relief). He was the only one of the 10 primary pitchers used that season not to start a game.

Jack slumped in 1965, and although still leading the staff in games, he shared the bullpen ace duties with rookie Gary Wagner.

After the 1965 season, Baldschun was traded to the Orioles for veteran outfielder Jackie Brandt and pitching prospect Darold Knowles (who would become the Phillies' bullpen stopper in 1966). Three days later, Baltimore flipped Jack to the Reds in the Frank Robinson trade.

He appeared in 9 games (13 innings) for the Reds, but spent most of 1967 and all of 1968 with the Reds' AAA team. Baldschun was released by Cincinnati prior to the 1969 season, and signed with the expansion San Diego Padres in mid-April. Jack spent the entire 1969 season with the Padres, but appears to have been the 9th man on a 10-man (expansion team) staff.

Baldschun split the 1970 season between San Diego and their AAA team, with his final big-league appearance coming on August 21st. After 1 game with triple-A Hawaii in 1971, his career was over.
Posted by Jim from Downingtown at 7:50 PM 3 comments: