According to my Topps book, this is the only baseball card for Marion Sylvester "Bud" Zipfel (#69). I thought he would be the last person listed in the index, but Richie Zisk and Frank Zupo (1958) are after him.

Bud was signed by the Yankees in 1956, and spent 5 seasons in their farm system before the Los Angeles Angels selected him in the expansion draft prior to the 1961 season. The same day, the Angels traded him to the Senators for shortstop Ken Hamlin (who was also selected in the expansion draft, from Kansas City). 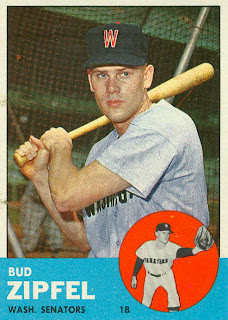 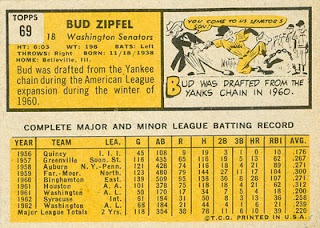 After starting 1961 in the minors, Zipfel made his major-league debut on July 26th, and started 44 of the final 66 games at 1B for the Senators, taking over from Dale Long. Apparently, that wasn't enough to impress, because he was back in triple-A in 1962. Zipfel didn't get extended playing time at 1B until September 8th, although he saw some action in left field earlier in the season.

Bud's only major-league playing time came in 1961 and 1962. After the '62 season, he kicked around the minors for 4 more seasons, playing for the Reds', Tigers', Cardinals', and Phillies' organizations.
Posted by Jim from Downingtown at 12:03 PM 1 comment: