This is the final card for Chuck Essegian (#153). Chuck played for 6 teams in his 6-year career. (I wonder if he ever unpacked?)

Chuck began his career in 1953, playing for various unaffiliated minor-league teams for 4 seasons, until he was drafted by the Cardinals in December 1956. They must have had 2nd thoughts, as he was released the following day. 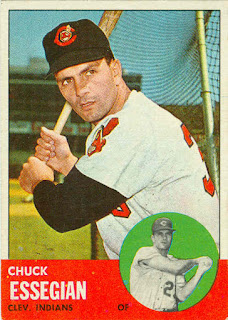 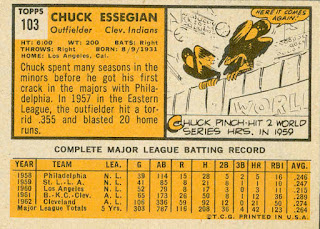 Essegian finally avoided the minors beginning in 1960. He spent the entire season with the Dodgers, although only appearing in 52 games. The Orioles purchased him before the 1961 season, but after only 1 game he was traded to the Athletics (with pitcher Jerry Walker) for pitcher Dick Hall and (future manager) Dick Williams.

Chuck's stay with the Athletics lasted 3 weeks, until he was sold to the Indians in early May. He was the backup at all 3 outfield positions in 1961, but made 85 starts in left field in 1962, sharing the position with Al Luplow.

1963 would be Chuck's last season in the majors. He was traded back to the Athletics (again for pitcher Jerry Walker) and made 51 starts in left field for KC (none after July 21st), finally losing his job to Manny Jimenez and rookie Ken Harrelson.

Essegian played in Japan for the 1964 season.
Posted by Jim from Downingtown at 12:37 PM No comments: