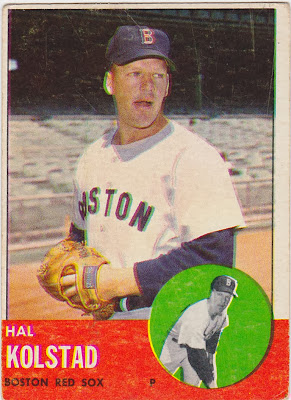 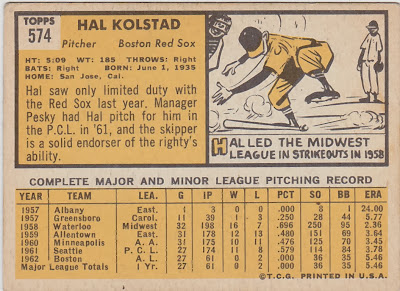 Wisconsin native Hal Kolstad was a baseball letter-man at San Jose State University and was signed by the Red Sox in 1957. He moved up the Sox' minor league ladder as a starter putting up double digit wins (and about the same number of losses for the most part) but generally good numbers otherwise.

Baseball Reference (as well as the card's cartoon) point out that Kolstad had a notable 1958 season in the Midwest League, leading the league in strikeouts with 250 and beating Juan Marichal who had 246.

He earned a spot on the staff for 1962 and appeared in 27 games including a pair of starts. Both ended up being no decisions. In his 25 relief appearances he earned a couple of saves and two losses and posted a 5.43 ERA for the season. He was again with Boston in '63 as the season opened but he made a couple of round trips to the AA level. He lost both decisions that season as well and his ERA in 7 games was a brutal 13.09 in 11 innings. He was farmed out in July and never pitched in the majors again.

Kolstad finished up his baseball playing days with a season in the Red Sox system and, after a trade, a final year with the Angels' AAA club. His big league career totals show an 0-4 record with a earned run average of 6.59.

I found a Ron Kolstad also listed among San Jose States list of baseball athletes. That may be a relative. Hal Kolstad's grandson Ryan played for both San Jose State and Concordia University in Oregon.
Posted by Commishbob at 1:04 PM 1 comment: 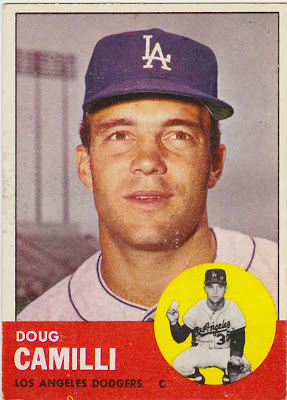 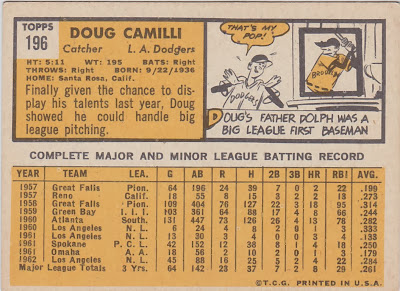 Catcher Doug Camilli is the son of 1941 NL MVP Dolph Camilli. Doug spent nine season in the majors, six of them complete seasons. He was signed by the Brooklyn Dodgers out of Stanford University in 1957. He got brief looks at the majors in 1960 and '61 before he stuck in 1962.

With the Dodgers Camilli backed up Johnny Roseboro for three years including the Dodgers' World Series winning 1963 campaign. Camilli did not appear in the Series. His best season in a Dodger uniform was 1962 when he hit .284 with 22 RBI in about 100 plate appearances.

He was sold to the Senators for the '64 season and that was his busiest year as he got into 75 games while serving as Paul Casanova's back-up and pinch hitting. His playing time dwindled over the course of the next two seasons and he moved into the coaching ranks in Washington in 1967. The next season he was activated at the end of the season and got into one final big league contest. He whiffed twice but got a single in his last major league at bat.

Camilli remained in the game as a coach and minor league instructor and manager through 1992, mostly in the Red Sox system.