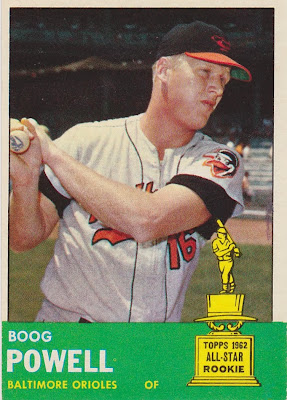 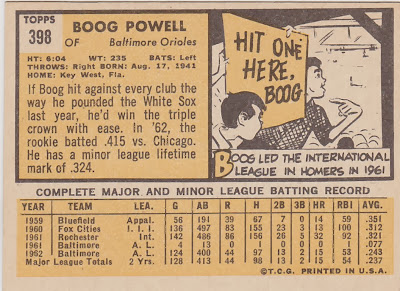 This card came out a year after Boog Powell's rookie season, That was a year he gave just glimpses of the hitting that would help the Orioles become a powerhouse franchise in the 60s and 70s. I was lucky enough to witness one of those 1962 moments. I was attending my first Orioles games in Memorial Stadium on June 22 when in the second game of the doubleheader against the Red Sox he became the first player to hit a home run over the center field hedges. It was measured at 469 feet and was the longest homer in the old ballpark up to that time.

Boog went on to hit 339 homers in a career that stretched to 1977 when he finished up with the Dodgers. His last year as a full time player had been 1975, playing for Frank Robinson as Robby became the first full time black manager in the major leagues. Boog hit .297 that year with 27 homers which represented a resurgence from his declining stats in his previous two seasons in Baltimore.

Powell made four AL All Star teams although he probably was squeezed out by the crowded field of great players that held down first base in his time. He finished third in the MVP balloting in 1966 but wasn't an All Star!

He did win the AL MVP in 1970 after finishing 2nd the previous year. Boog hit six postseason homers and won World Series rings with the Birds in 1966 and 1970. I was also in Memorial Stadium for the 1969 Playoff games against the Twins. Boog homered in the ninth inning of Game One to tie the game which the O's went on to win and scored the winning (and only!) run in the bottom of the 11th of Game Two. He scored from second on a single by Curt Motton and ended a spectacular pitching duel between Dave McNally and Dave Boswell.

As an Orioles fan of more that 50 years, all I can say is "Those were the days!!"

Nowadays Boog serves up BBQ at his stand in Camden Yards. Last time I was Ocean City, Maryland he had a place on the Boardwalk there as well. 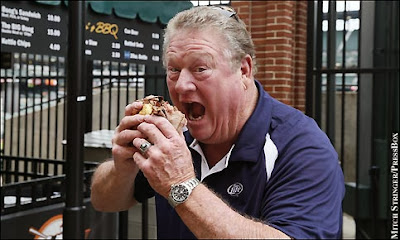 Here is a great publicity still of Boog taken in 1964 with Oriole Teammates Harvey Haddix and Luis Aparicio. They were posed with Big Boog because they were the smallest Orioles on that club. 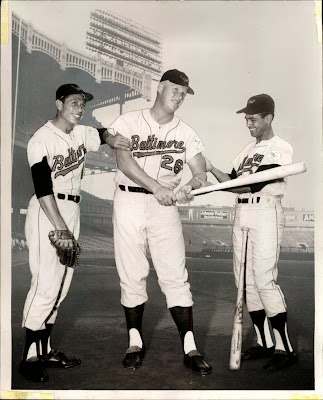 Posted by Commishbob at 9:50 PM

wasn't there an alledged obsenity on the end of Boog's bats? Or was that myth??? :)?

That was Billy Ripken's bat.

Supposedly that is a dong & balls drawn on the end of Boog's bat on that 1963 card...which is what I think the other commenter is referring to.