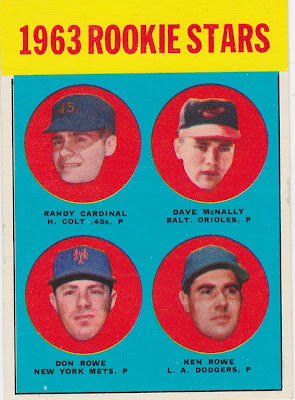 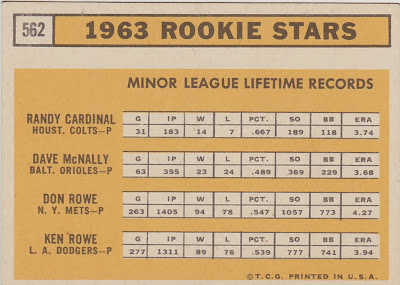 It's been about six weeks since Jim from Downingtown offered me the chance to contribute over here on the '63 Topps blog. But life has a funny way of interfering with plans. Travel, computer issues and other projects combined to throw me further and further behind. But I'm here now and figured I'd make up for lost time with a 4 for 1 post featuring one of the '63 Topps' 'floating heads' rookie cards.

This one features pitchers, and one of these four is not like the others. One of them had an impact on the game both on and off the field. Let's look at the other three first.

Conrad 'Randy' Cardinal was Tiger signee out of Long Island, New York in 1962. An impressive minor league season at the 'D' League level caught the attention of the Houston Colt 45s who drafted him away from Detroit that winter. He made the 45s roster to start the 1963 season but in six appearances (including one start) he took a beating and was sent down in May. He pitched in the Houston system into 1965 before leaving the game.

Don Rowe and Ken Rowe are not related, at least by blood, but they have much in common. Both spent a decade toiling in the minors before getting to pitch in the majors. They debuted within six days of each other in April of '63. They both had exactly 26 major league appearances. And they both became major league pitching coaches.

Ken Rowe signed with the Tigers in 1953, spent three seasons in their chain, and was drafted away by the Dodgers. He pitched seven seasons toiling away in the Dodger's pitching-rich system before making his debut in 1963. That year he split time with the big club and Spokane going 1-1 with a save in 14 games for the Dodgers. He'd been a starter for most of his minor league days but in the majors he was exclusively a bullpen guy. Don't know if he got a ring as part of their championship team but I'll bet he got a partial share of the money.

In 1964 he was back in Spokane and he pitched in 88 games, all in relief. He was purchased by the Orioles late that year and got into a handful of games with them. With the exception of 6 games with the Birds in '65 he finished out his career in the Orioles' minor league system, pitching last in 1968. After his playing days he managed and coached in the minors and was a pitching coach for the Orioles following Ray Miller.

Don Rowe was signed by the Pirates in 1954 after a year of independent ball. He pitched for eight seasons in the minors, mostly in a starting role but he did spend a season or so as a reliever. The Mets drafted him away from the Bucs in 1962 and the following year he made their staff. He appeared in 26 games between Opening Day and mid-July and set a record for the most innings pitched without a decision or a save (54.2). He started one game in April and went five+ innings allowing three runs. The Mets' bullpen lost the game.

Back to the minors he went for the remainder of that season and the next several before he retired. He spent six seasons as pitching coach the White Sox and Brewers. He also did some college coaching.

Dave McNally stands out on this card as being the most accomplished (by far) major leaguer. The Billings, Montana native pitched two years in the Orioles' chain following his 1960 signing and he got a taste of the bigs with a single September start in 1962. He made a splash that day with a complete game shutout of the A's.

He was a sub .500 pitcher for the Orioles for the next two seasons but emerged in 1965 as a contributor, winning 11 games and posting a 2.85 ERA. He was a key member of the young Baltimore rotation that took the Birds to the World Series in 1966. He started Game One of the World Series that year against the Dodgers. Wildness forced an early exit in favor of Moe Drabowsky who went on to win the game. McNally returned to pitch and win the clincher in Game Four and the picture of him about to catch a high-flying Brooks Robinson after the win may be my favorite baseball shot ever.

He was sidelined for part of the '67 season with arm problems but came back to again be an integral part of the Baltimore staff beginning in 1968 and continuing through the 'glory days' of 1971. He won 20 or more games in each of those seasons and 46 more in the three years following that. He had a 7-4 postseason record for the Orioles including one of the best games I've ever seen pitched in person. In Game Two of the 1969 playoffs against the Twins McNally went all the way with 11 shutout innings in the Orioles 1-0 victory.

Traded to the Expos for 1975 McNally made 12 starts and then decided to retire. He had been pitching without a signed contract because he was not satisfied with the Expos terms. He, along with Andy Messersmith, challenged the prevailing baseball reserve clause claiming that they had pitched under their 'option' year and were thus free agents. McNally had no intention of ever pitching again but he wanted there to be more than one player involved in the legal fight he knew would ensue.

The arbiter ruled in the players' favor and the fabric of the game was changed forever. The story is told in more detail in McNally's New York Times obit. 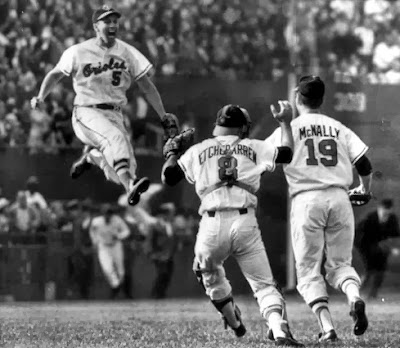 Posted by Commishbob at 7:14 PM