Here is the final card (#551) for infielder Billy Klaus. Billy was signed by the Cleveland Indians in 1946, and played 9 minor-league seasons in the Indians’, Cubs’, Braves’, and Giants’ organizations.

He made his major-league debut with the Boston Braves in April 1952, playing 7 games before returning to the minors for the rest of the season. He also played 2 games with the Milwaukee Braves in 1953. 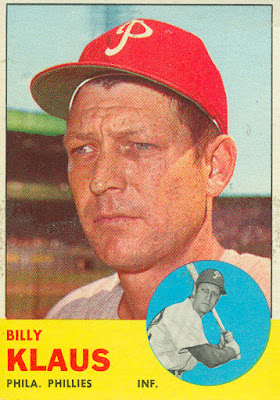 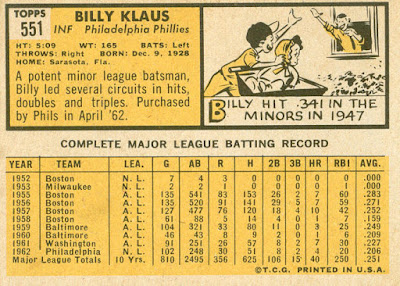 After his 1954 minor-league season, the Giants traded him to the Red Sox, and he was in the majors to stay beginning in 1955. Billy was the BoSox’ regular shortstop in 1955, finishing 2nd in the AL Rookie of the Year voting (to Indian’s pitcher Herb Score).

Klaus moved over to 3rd base the following season to accommodate rookie shortstop Don Buddin, but returned to shortstop in 1957 when Buddin lost the season to military service. Buddin returned in 1958, and with 1957 rookie sensation Frank Malzone entrenched at 3rd base, Klaus was relegated to the bench. Billy only played in 61 games that season – mostly as a pinch-hitter.

Klaus was traded to the Orioles after the 1958 season, and spent 2 years as the backup SS-3B behind Ron Hansen and Brooks Robinson. The expansion Washington Senators drafted him before the 1961 season, but he only managed to fill a backup role with the first-year team.

Klaus passed away in 2006 at age 77. His brother Bobby was also an infielder for several clubs in the 1960s.
Posted by Jim from Downingtown at 11:48 AM No comments: