Here's the final card for Joe Torre's big brother Frank (#161). Both Frank and Joe (wait, is this a Hardy Boys book or a baseball card blog?) started out with the Milwaukee Braves, but never played together.

Although they were both on the 1960 Braves' team, Frank had been sent down to the minors in late June, months before Joe's September call-up. (They played on different teams in the Braves' farm system in 1960 and 1961.)

Frank Torre was signed by the Boston Braves in 1951. After one season in class-A ball, he spent the '52-'53 seasons in military service. After 2 more seasons in the high minors, Torre made his major-league debut with Milwaukee in April 1956.

After a year as the backup to veteran Joe Adcock, Frank was the primary 1st-sacker during the Braves' two World Series years (1957-58), with Adcock riding shotgun. Their roles were reversed in 1959, with Torre only starting 63 games, to Adcock's 85. 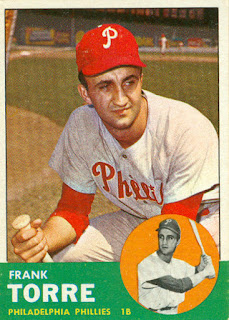 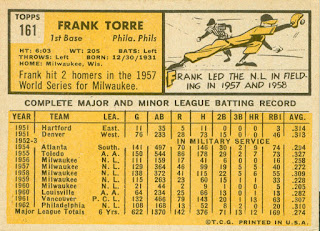 In 1960, Adcock completely took over the 1st base post. After only 21 games (10 starts), Torre was sent down to the minors in late-June, where he would remain until the Phillies acquired him prior to the 1962 season.

Torre retired after the 1963 season.

Posted by Jim from Downingtown at 10:08 PM