I don't usually post cards of players whose card I've posted elsewhere, but these pre-green-and-gold Athletics' uniforms look so unusual. This looks like a 1950s' photo.

Segui was signed by the Reds prior to the 1958 season (hey, maybe this photo is an airbrushed Cinn... nah!).  After the Reds released him in late April that season, he pitched most of the year for Tucson in the Arizona-Mexico League. 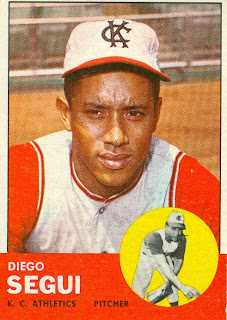 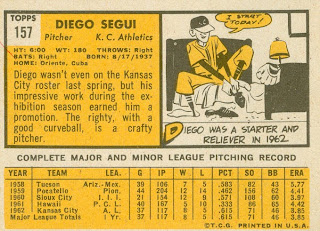 Although from Cuba, he was inducted into the Venezuelen Baseball Hall of Fame in 2003. His son David played for several teams in the 1990s.
Posted by Jim from Downingtown at 11:17 PM No comments: