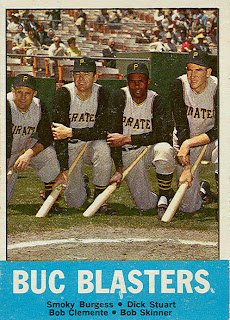 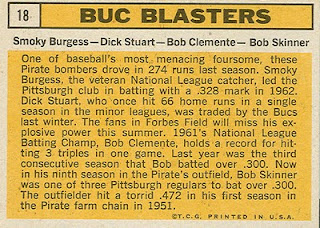 Topps really shoehorned a lot of players onto this card. In the late 1960s, most of these multi-player cards featured two stars from a team, with only the occasional card featuring 3 players. The card back indicates that Stuart was traded (to the Red Sox) after the previous season. This is stated in the body of the text, not a brief note tacked onto the end of the narrative (often in a different font). Maybe it would have been a better idea to only show Burgess, Clemente, and Skinner, then each player would have been more visible.
Posted by Jim from Downingtown at 8:39 PM No comments:

Hubbs was signed by the Cubs in 1959, and spent 3 seasons in their farm system. In 1959, he played both class D and class AAA ball. In 1960, he was at the A and double-A levels. In 1961, he played the entire season for the Cubs' class B team. Throughout his minor-league career, he was primarily a shortstop, although playing in several games at 3rd base and the outfield.

Ken made his major-league debut with the Cubs on September 10, 1961. He made 6 starts at 2nd base that month, including the final 3 games of the season, This brought an end to Don Zimmer's tenure as a Cubs' starter. (Zim had started 174 games at 2nd base since moving over from 3rd in early 1960, due to the combination of Tony Taylor being traded to the Phillies, and the arrival of rookie Ron Santo.) 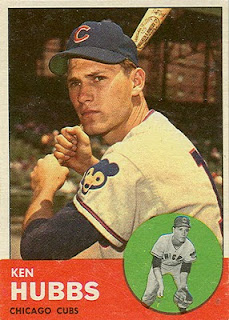 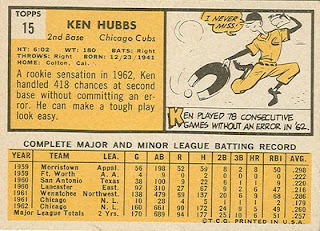 1962 was a season of change for the Cubs' infield. Longtime shortstop Ernie Banks moved over to 1st base as of opening day. He was replaced at shortstop by Andre Rogers, who took over the starting job and would hold it to the end of the 1964 season. Hubbs claimed the 2nd base job, starting 158 games there in his rookie season. Ken batted .260 in 715 plate appearances, but also led the league in strikeouts and grounding into double plays. Still, he won the National League Rookie of the Year in 1962. Hubbs was also the first rookie to win a Gold Glove award.

Ken had similar playing time in 1963 (154 games, 149 starts at 2B), but his numbers were significantly down from his rookie season. He had 39 fewer hits, 36 fewer runs scored, 5 fewer doubles, 6 fewer triples, and his average dropped 25 points. On the plus side, he hit 3 more home runs, and cut his strikeouts by 36.

After the 1963 season, Hubbs decided to take flying lessons, and received his pilot's license in January 1964. A month later, he and a friend were flying a private plane from Utah to California, when it crashed in Utah during a snowstorm, killing both occupants.

Topps issued a tribute card in its 1964 set, and embarrassingly, used a photo of Hubbs on their 1966 Dick Ellsworth card.

I noticed today that Hubbs' position does not appear on the front of this card. It is normally found to the right of the team name.
Posted by Jim from Downingtown at 11:08 PM 2 comments: