I posted Curt Simmons’ final card on my 1967 blog several years ago, but it was part of a multi-card post about the players’ crew cuts, and didn’t get into their playing careers, so Curt is back for a 2nd look.

Curt Simmons had a 20-year career (1947-67) playing for 4 teams, mostly for the Phillies, and later the Cardinals.

Simmons was signed by the Phillies in 1947, and pitched that season for the Wilmington (DE) Blue Rocks, the Phillies’ class-B team. He compiled a 13-5 record, then made his major-league debut with the Phillies at age 18 during a September call-up. 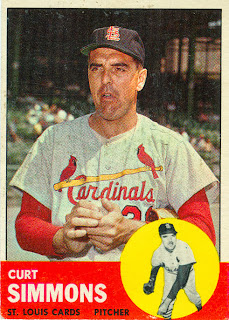 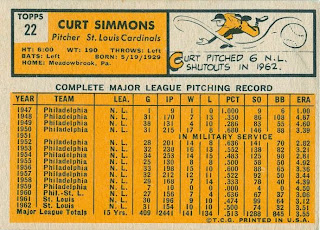 In 1948, southpaw Curt joined 21-year-old righthander Robin Roberts in a rotation that also included 39-year-old Dutch Leonard and 38-year-old Schoolboy Rowe, both of who began their careers in 1933.

By 1950, Roberts and Simmons were the Phillies’ #1 and #2 starters, leading them to their first post-season since 1915. Curt missed the final month of the 1950 season and the World Series, due to his call-up to active military service during the Korean War.

Simmons had an off-year in 1958, and came down with a sore arm in 1959, spending part of that season in the minors. The Phillies released him in mid-May 1960, after only 4 starts.

Simmons was picked up by the Cardinals three days later, and spent the next 6 years in their starting rotation. He won a career-high 18 games in 1964, and together with Bob Gibson’s 19 wins and Ray Sadecki’s 20 wins, they twirled the team to a World Championship.

He experienced another off-year in 1965, and with a slow start in 1966, he was sold to the Cubs in late June. Simmons pitched for the Cubs just over 1 calendar year before moving on the the Angels in early-August 1967.

He was released after the season, ending his 20-year career. He finished with a career record of 193-183, with 1697 strikeouts.

Simmons and White Sox’ catcher Smoky Burgess were the last 2 players to retire that had played in the 1940s.
Posted by Jim from Downingtown at 12:17 AM 2 comments: