Green was signed by the Phillies in 1955 and pitched in the minors for 5 1/2 seasons before making his major-league debut in June 1960. Dallas was a spot starter/reliever for the Phillies for the next 3 1/2 seasons. In the Phillies' near-miss 1964 season, Green split his time between the Phillies and their AAA team in Little Rock, Arkansas. 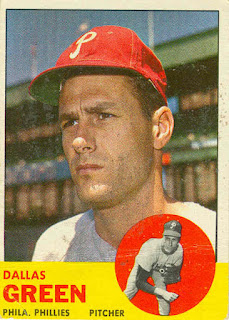 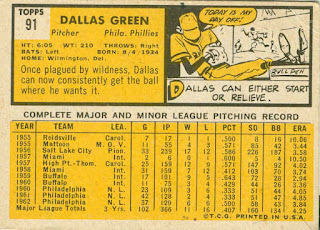 Green was sold to the Senators at the start of the 1965 season, but was returned a month later. He spent the remainder of that season, and most of the 1966 season with the Phillies' AAA team. In August 1966 Dallas was sold to the Mets, but once again returned to the Phillies after a month. His final season as a player was in 1967, where he split his time between Philadelphia and double-A Reading, before the Phillies released him in mid-September.

After his playing career, Green worked in the Phillies' farm system under Paul Owens. When Owens became the team's GM in 1972, Green moved up to Farm Director. Under Owens' and Green's watch, the Phillies developed Larry Bowa, Greg Luzinski, Mike Schmidt, Bob Boone, and others. Dallas became the team's field manager when Danny Ozark was fired in 1979.

After leading (driving?) the team to their first World Series championship, Dallas moved on to the Cubs, as President and GM. After some high-profile stints managing the Mets and Yankees, he returned to the Phillies' organization as an adviser to the general manager.


Dallas Green's granddaughter was the young girl killed during the January 2011 shooting of a congresswoman in Tucson, Arizona.
Posted by Jim from Downingtown at 9:22 PM