Here's another player I never heard of until getting this card a few months ago, in a gift-pack from DeansCards.com. I'm instituting a new label (New to Me) for these cards. It will apply to most of the 1963 cards, as well as a few on my 1966 and 1970 blogs.

After playing in the Negro Leagues in 1947, Al Smith was signed by the Indians in 1948, and made his big-league debut in July 1953. As a rookie, he started every game in centerfield for a month during July and August. Over the next 3 seasons, Smith was one of the Indians' top outfielders, switching positions from one season to the next. In 1955, Al led the league in games, plate appearances, and runs scored. In his last season in Cleveland (1957) he was the team's 4th outfielder, once Roger Maris joined the team. 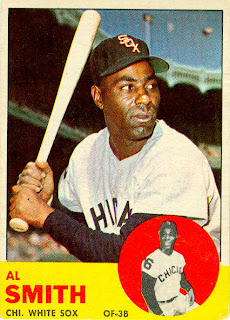 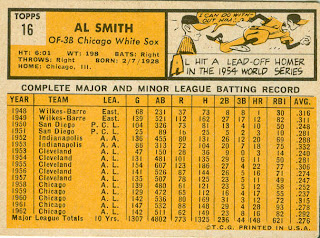 After the season, he and pitcher Early Wynn were traded to the White Sox for outfielder Minnie Minoso and 3rd baseman Fred Hatfield. Al spent the next 5 seasons as a regular in Chicago, the first 3 as a corner outfielder, then transitioning to 3rd base during 1961, and finally playing fulltime at 3rd base during the 1962 season.

By the time this card was issued, Smith had left Chicago. In January 1963, he and shortstop Luis Aparicio were traded to the Orioles for pitcher Hoyt Wilhelm, shortstop Ron Hansen, 3rd baseman Pete Ward, and outfielder Dave Nicholson. Al wasn't there long, as the Indians re-acquired his services after the 1963 season for outfielder Willie Kirkland.

Released by Cleveland in August 1964, Al wrapped up his career with a 2-month stint with the Red Sox.
Posted by Jim from Downingtown at 10:20 PM