John Melvin "Bubba" Phillips had a 10-year career during the 1950s and 1960s, playing for the Tigers, White Sox, and Indians. (It seems like almost all the players on this blog have played for those 3 teams!)

Phillips began his career in 1948 as an outfielder with the unaffiliated class-D Stroudsburg (PA) Poconos, in the North Atlantic League. The following season, he joined the Tigers' organization, and played 4 seasons in their farm system before spending 1953-54 in military service. He returned to baseball in 1955, and spent the next 10 seasons as a fulltime major-leaguer.

After his rookie season as a backup outfielder with the Tigers, Bubba was traded to the White Sox for pitcher Virgil Trucks. Although he was again a backup outfielder in 1956, the following season found Bubba as the Sox' regular 3rd baseman. His new status was short-lived, as he was relegated to backup 3rd baseman/6th outfielder in 1958. Phillips did an about-face in '59, playing 100 games as the regular 3rd baseman, along with 23 games in the outfield. It would be his last season in Chicago. 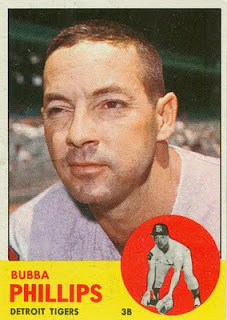 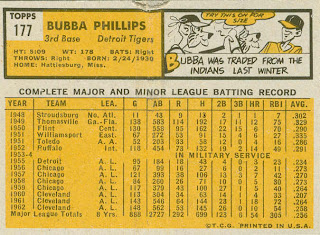 On December 6th, Bubba was traded to the Indians (along with catcher John Romano and 1st baseman Norm Cash) for outfielder Minnie Minoso, catcher Dick Brown, and 2 others. Phillips spent 3 seasons in Cleveland, the last 2 as their regular 3rd baseman, starting over 140 games there each season.

After the 1962 season, Bubba was traded back to the Tigers for pitcher Ron Nischwitz. He played the final 2 big-league seasons there, appearing in 128 games (mostly at 3B) in 1963, but only 46 games in his final season.

Phillips was released by the Tigers in February 1965, and spent that season playing for Milwaukee's AAA team in Atlanta, before retiring.
Posted by Jim from Downingtown at 11:32 PM