This is the next-to-last card for Minnie Minoso.

Saturnino Orestes Armas (Arrieta) Minoso was signed by the Cleveland Indians in 1948. After only 11 games in class A ball in 1948, Minoso jumped to triple-A to start the 1949 season. After 2 full seasons with the Indians' AAA team in San Diego, Minnie made the majors for keeps to open the 1951 season. His time in Cleveland was short though, as on April 30th he was traded to the White Sox in a 3-team deal that also included the Philadelphia Athletics.

Minoso became a star immediately, finishing 2nd in the Rookie of the Year balloting in 1951, and began a string of 11 straight years with over 600 plate appearances. He was a 7-time all-star, including his 1st 4 seasons in the league. 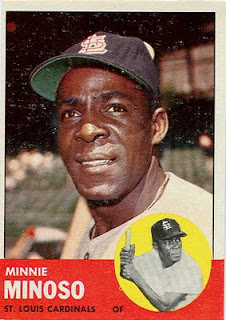 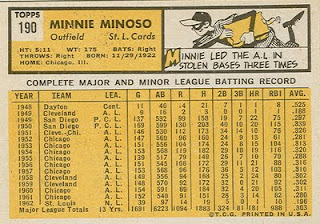 During his rookie season, he split his time evenly between 3rd base and the outfield. After that season he was primarily an outfielder, although he managed to appear in a few games at 3B each season. In 1952, he alternated between left field and center field, before settling in as the ChiSox' regular left fielder for the next five years.

After the 1957 season, Minoso was traded back to the Indians for pitcher Early Wynn and outfielder Al Smith. Minnie manned the left field spot for Cleveland in 1958 and 1959, before being traded to - THE WHITE SOX! This latest maneuver was a 7-player deal which included 1B Norm Cash and catcher Johnny Romano going to the Indians.

Minoso led the AL with 184 hits in 1960, and collected his last all-star appearance. After 2 seasons with the Sox, he was traded again, this time to the Indians Cardinals. Minnie's playing time with St. Louis in 1962 was cut way back to 39 games, mostly as a 3rd-string left fielder.

In April 1963, the Senators purchased Minoso's contract. He spent 1 season in Washington, sharing the left field job with Chuck Hinton, before getting his release in October. The following April, he hooked on with the White Sox, appearing in 30 games before they released him in July.

Minoso played ball in various Mexican leagues from 1966-1969, before going on to a long career as a coach with the White Sox.
Posted by Jim from Downingtown at 10:27 PM 3 comments: