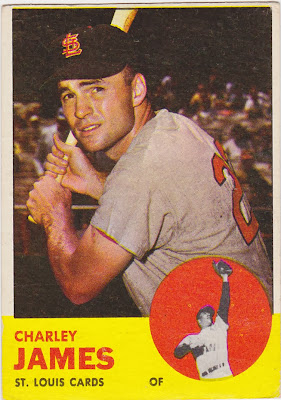 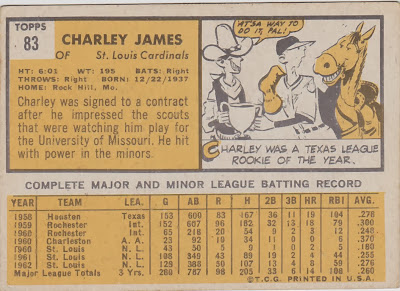 Hi Charley..err...Charlie...ummm...which is it? Topps didn't seem to know exactly but nevertheless here is Mr. Charley/Charlie James in all his colorful 1963 card glory. Since he autographed cards with 'Charlie' I'm going with that.

James was a Missouri boy all the way. Raised in a Webster Groves near St. Louis he was a prep baseball and football star who lettered in football at the University of Missouri. A thigh injury that landed him in the hospital got him to thinking about how football threatened his intended baseball career so he left to play pro ball. (He later received his degree from Washington University of St. Louis.)

Signed by the hometown Cardinals in 1958 he showed enough pop and promise to earn an extended trial with the club in August of 1960. From 1961 through 1964 he played the outfield for the Redbirds if not full time, then something close to it. He hit in the .260s or so in the three years he played as a 'mostly regular/fourth outfielder' but by 1964 his playing time diminished as his average fell off and the Cards decided a guy by the name of Lou Brock fit their plans in leftfield better. He stayed with the Cards long enough to earn a World Series ring in '64, pinch hitting three times in the Series, but was traded off to the Reds that winter.

After a year in which he served as a pinch hitter off the Reds' bench he was out of the game. Here is a fun blog entry detailing a 1962 game that was billed as a Bob Gibson vs. Sandy Koufax showdown that didn't turn out that way and was the game that saw James his his only career grand slam. It came off the great Koufax.

But back to the Charlie v. Charley thing. Topps seemed to have a difficult time deciding. Here are James' other cards (images from the net): 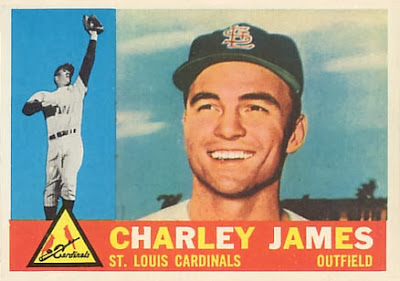 1960 'Charley' James. He was Charley front and back on his rookie card. 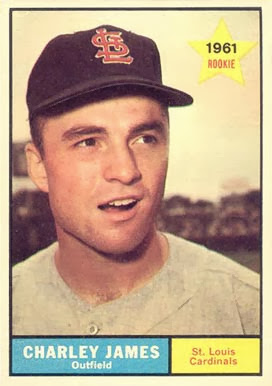 1961 saw him still as Charley on both sides of his card. 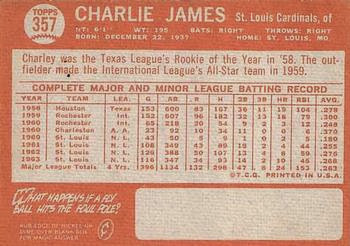 And finally, on his last card in 1965 Topps goes out with a bang by reverting to 'Charlie' front and back. 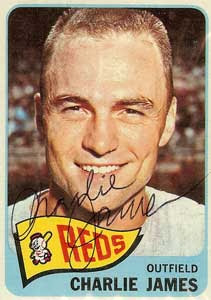 Of course none of this matters to anyone except me and perhaps Charlie who, btw, is still talking and thinking baseball.
Posted by Commishbob at 10:56 AM