I have 69 cards in the 1963 set, and 21 of them are Phillies. I better start working them in now and then, otherwise this will turn into an all-Phillies blog down the road.


Art Mahaffey was one of the Phillies' top starting pitchers in the early-to-mid 1960s. Art was signed by the Phillies, and pitched for 4 1/2 seasons in their minor-league system. In 1956 he played for the class-D Mattoon (IL) Phillies, where not one of his teammates made it to the big leagues. The following season, while pitching for class-B High-Point-Thomasville (NC), one of his teammates was future Phillies' pitcher and manager Dallas Green. His manager there was Frank Lucchesi, who would manage the Phillies from 1970-72.

After compiling a 16-5 record in 1959 and 11-9 in the first half of 1960, Mahaffey made his major-league debut with the Phillies on July 30th, joining a rotation that included Robin Roberts, Jim Owens, and John Buzhardt. Art started 12 of his 14 games that season, and finished with a 7-3 record. 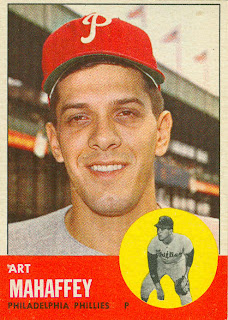 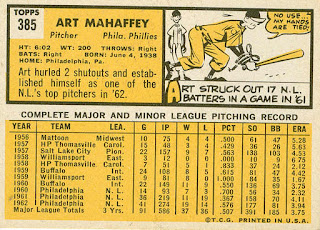 Mahaffey was a key member of the Phillies rotation from 1961 through 1964. He led the NL with 19 losses in 1961, but the Phillies were a bad team, and he must have been doing something right, or he wouldn't have remained in the rotation.

1962 brought an almost complete turnover of the rotation, as rookies Jack Hamilton and Dennis Bennett, along with veteran Cal McLish replaced Roberts and Buzhardt. Mahaffey led the staff in starts (39) and innings (274) while posting a 19-14 record.

Mahaffey's starts were cut in half in 1963, since rookie Ray Culp and lefty Chris Short both joined the rotation (and Hamilton was traded away). In fact, Art dropped to #4, ahead of only Bennett.

He bounced back in 1964 with a 12-9 record, but was still stuck in the #4 starter's role, behind newly acquired Jim Bunning, as well as Short and Bennett. This was his last effective season as a starting pitcher. In 1965 he only started 9 games (mostly in May), and was relegated to the bullpen for much of the season, in favor of Ray Herbert and Bo Belinsky (both acquired from the American League in the off-season).

After the 1965 season, Mahaffey was traded to the Cardinals (with outfielder Alex Johnson and catcher Pat Corrales) for 1st baseman Bill White, shortstop Dick Groat, and catcher Bob Uecker. Art split the 1966 season between the Cardinal's bullpen and starting for triple-A Tulsa. He played his last major-league game on July 17, 1966.

On April 1, 1967 Mahaffey moved on to the Mets, in a 5-player trade involving Jerry Buchek and Ed Bressoud. He would play that season with the Mets' and Cubs' minor-league teams before retiring.
Posted by Jim from Downingtown at 1:40 PM