Obviously Topps has no idea what the future will bring when they issue a player’s rookie card. Sometimes you end up with the iconic magic of the ’52 Mantle, but most players end up with a tiny head on a multi-player card. In the case of today’s offering, Manny Mota’s rookie card features him full sized, but hatless and pedestrian in his first Topps player card. 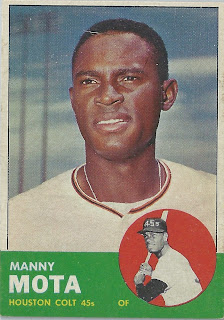 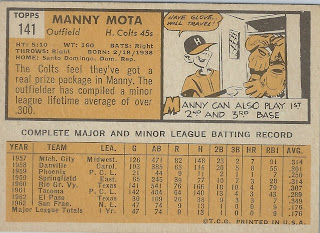 The photo is close-up and shows an eager rookie, gazing in the distance with no idea what the future would hold.

The card lists Mota as an outfielder for the Houston Colt 45s on the front of the card and his inlay photo has a bold “45s” written on his hat. Mota, of course, never appeared for Houston. He broke into the big leagues in the middle of season in 1962 for theSan Francisco Giants after he began his 6th season in their farm system making noise at the plate for El Paso in the AA Texas League. He was batting .349 after 30 games.

Although his average in the minors stayed north of 300 more often than not, he was anything but a lock for the big leagues, especially on a team with a surplus of outfielders who could seriously slug like Mays, McCovey, Kuenn and Felipe and Matty Alou. Those 5 were established 300 hitters in the Majors and even though Mota was a 300 batter in AA – he didn’t have the upside that typically fast tracked prospects to the big club.

Honestly after 5 full seasons in the minors, even though his average stayed about 300, there wasn’t anything eye-popping about Mota as a prospect on a powerhouse team like the Giants. He could hit the ball, but he had no power. He was versatile in the field, but didn’t have much of an arm or speed and even though he could get on base – he wasn’t a base stealer.

He did earn himself a 47 game cup of coffee in San Francisco on a team that won 100 games and the National League Pennant. Not a bad team for your first big league experience… Still, Mota didn’t do much to help the Giants getting there. He managed just 14 hits in 74 at bats (.176) – nearly all singles (1 double). He might have been a big leaguer, but he wasn’t ready to take a spot on the NL’s top squad. Subsequently they would trade him – to the 45s and his appearance on this slab of cardboard.

The back of the card mentions that the Colts “feel they’ve got a real prize package in Manny” – that was probably true, but he would never play a game for them. He would be dealt to Pittsburgh in April of ’63 and the rest is history.

Manny Mota would play for 20 seasons in the Majors plus another decade as hitting coach for the Dodgers where he added to his collection of Pennants. He would maintain a reputation as one of the great clutch hitters of his generation. He never became a power hitter or a base stealer, just a singles hitter, but his late inning singles won many games and kept him employed and treasured by his teams and their fans.
This ’63 offering is Mota’s rookie card and he would appear regularly in every Topps issue for 18 years, making his final appearance in 1980.

Mota retired with a .307 batting average and at the time of his retirement he held the record for the most pinch hits of all time and was regarded as the best ever in that role. It is ironic that it all began with this card that mentions Manny could play 1st, 2nd or 3rd base and his cartoon says “have glove, will travel”.
Mota never played 1st in the big leagues and only had 1 start at second. Looking back it might have read “have bat, will hit game changing singles”.

I could go on (and on and on) about Mota’s lengthy career in baseball – his records and accomplishments, but in 1963 he was just a guy fighting for a spot on a roster.

Thanks for reading my first post here! Feedback is welcomed. Go Vintage! Go Rays! Troll out.
Posted by Collective Troll at 1:48 PM 2 comments:

Wow! I'm back here already, less than 2 months since my last post. Actually, I checked in to say that this 1963 Topps blog is now a team blog, and Collective Troll has joined the staff. I look forward to his contributions to this blog, while I focus on my 1966-69 Topps blogs.


Bill Virdon was the long-time center fielder for the Pirates from 1957-1965. After retiring, he became a Pirates' coach, but was pressed into active duty for 6 games in late-July 1968. 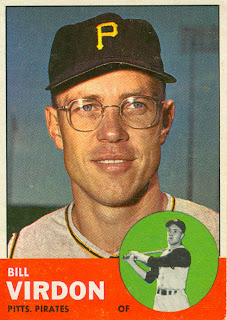 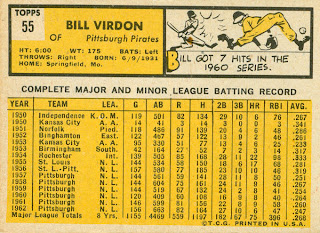 Virdon was signed by the Yankees in 1950, and played 4 seasons in their organization. In April 1954, he was traded to the Cardinals for veteran outfielder Enos Slaughter. After another year in the minors, Virdon won the 1955 Rookie of the Year award as the Cardinals' everyday center fielder.

After starting 22 of the first 24 games in center for the Cardinals in 1956, Bill was traded to the Pirates for outfielder Bobby Del Greco and pitcher Dick Littlefield.

After his release by the Pirates following the 1965 season, Virdon managed the Mets' AA ('66) and AAA ('67) teams, then hooked on as a coach for the Pirates in 1968, under new manager Larry Shepard.