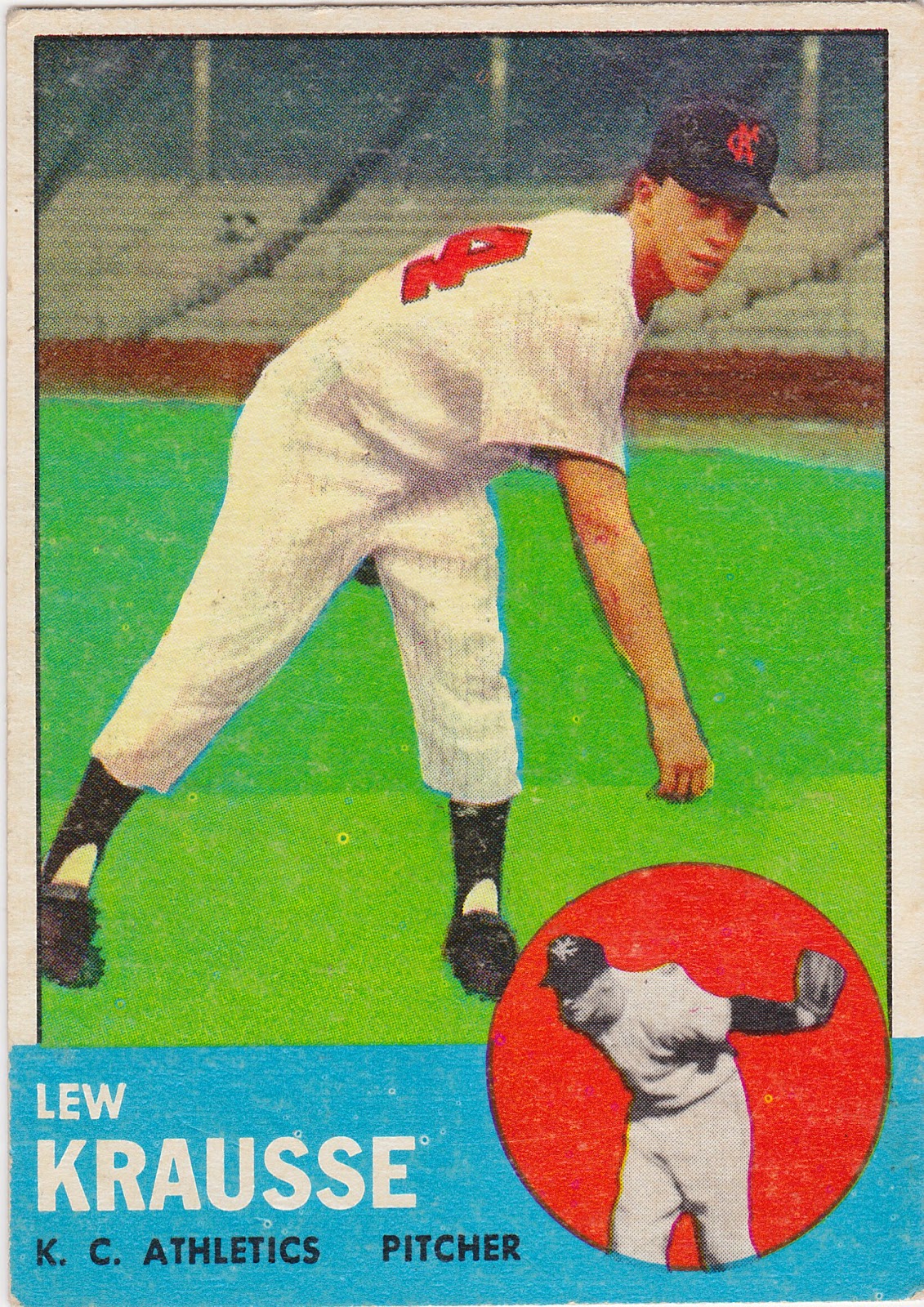 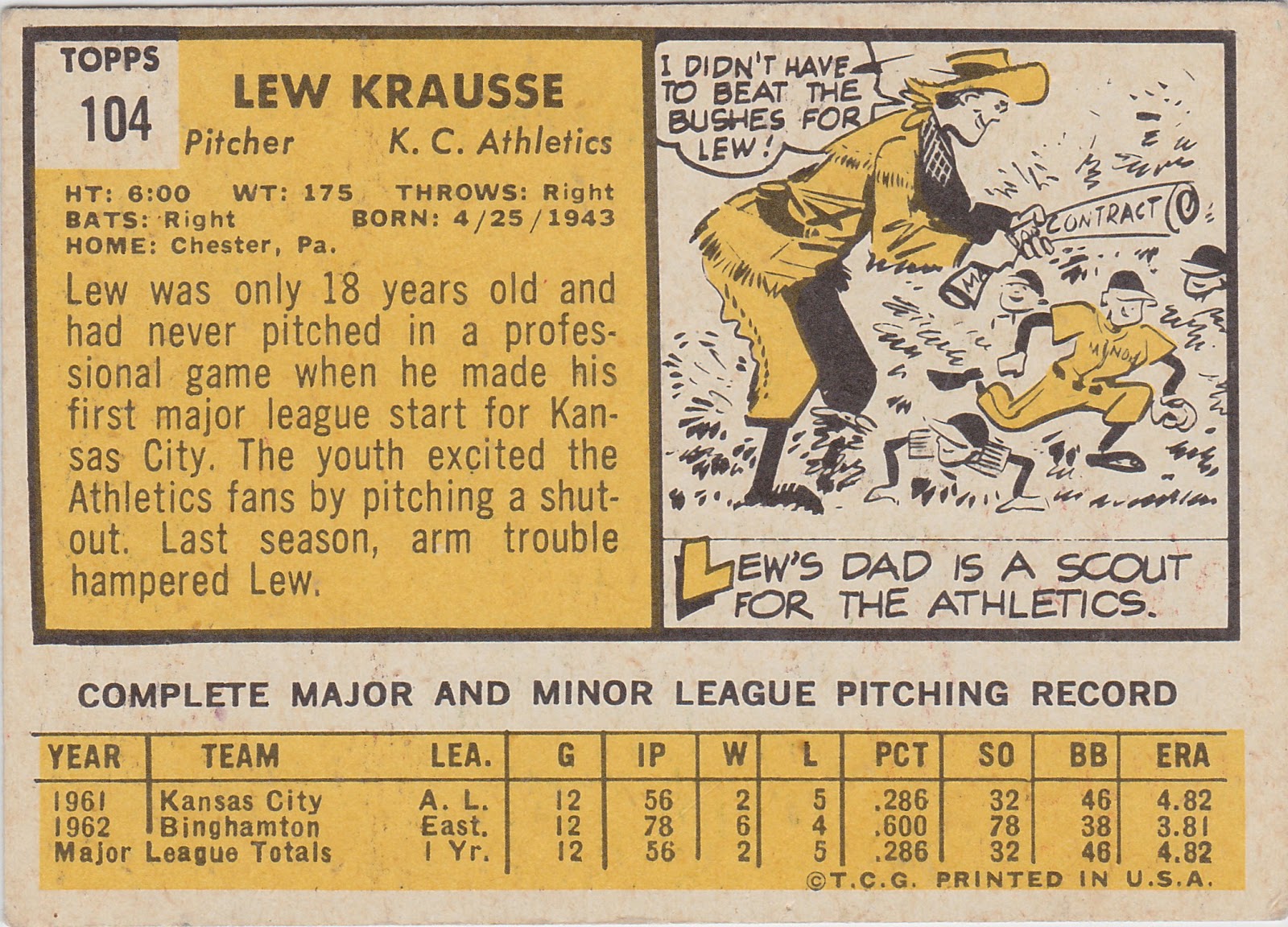 Lew Krausse Jr. was signed right out of high school to a $125,000 bonus contract with the Athletics. A week after signing in June of 1961, he pitched a six-hit shutout against the Angels. That must have made the scout who signed him doubly proud. That scout was his dad, Lew Krausse Sr. The elder Krausse pitched for the Philadelphia A's in the early 30's and had a long minor league career.

Lew, Jr. ran into rough times the remainder of that rookie season as he lost five straight before ending his year with his second complete game win in September. Arm issues and wildness kept him off the Athletics staff for four years with the exception of a few brief looks by the big club.

But Krausse returned with a vengeance in 1966 as he won 14 games with a sub-3 ERA. He remained in the A's rotation with varying degrees of success through the 1969 season. He had an interesting relationship with A's owner Charles Finley. The franchise was in free fall late in 1967 when Finley fined Krausse for 'misconduct' on a team flight. The whole thing escalated until Finley ended up firing manager Alvin Dark and releasing outfielder-first baseman Ken Harrelson who went on to help the Red Sox nail down their AL title.

The A's moved to Oakland the following year and Krausse was unable to reclaim the effectiveness he had in '66. Over the winter following the 1969 season he was dealt to the expansion Seattle Pilots who moved to Milwaukee just days before the season opened. Krausse was the 'Brewers' Opening Day starter and he won 21 games in the two seasons he spent in their rotation.

Krausse spent the final four years of his career bouncing between the Red Sox, Cardinals and Braves and getting a couple of more shots in the A's minor league chain before he retired after 1975. He owned and operated a business in Kansas City after his playing days.

Krausse was also known as the victim of one of prankster/pitcher Moe Drabowsky's best tricks. From Krausse's SABR page:

(In 1966) Krausse found his way into baseball lore as one of the victims of a prank pulled in Baltimore by Orioles pitcher Moe Drabowsky. A former Athletic, Drabowsky dialed the Kansas City bullpen and told coach Bobby Hofman to “get Krausse hot!” Hofman complied, and moments later, the phone rang again: “Okay, sit him down.” To the guffaws of his teammates, Drabowsky repeated this procedure with the compliant Hofman. On the third call Drabowsky asked for Krausse and inquired, [Are y]ou warm, Lew?” Recognizing the voice of his friend and former teammate, Krausse realized they’d been spoofed, and the story made the major-league rounds to the embarrassment of both.

This card has the look of being a 'paint-enhanced' photo. Topps used the same photo on Krausse's 1964 card: 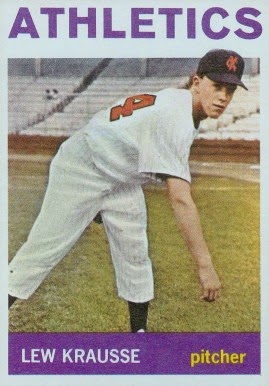 Here are the images, side by side: 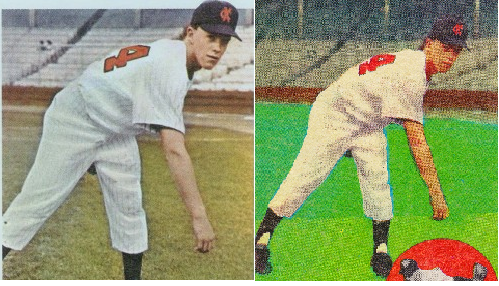