Jim Umbricht was a relief pitcher in the early 1960s with the Pirates and Houston Colt .45s.

He began his pro career in 1953, playing for unaffiliated teams in '53 and '56 (missing 2 seasons in the military). After the 1956 season, he was sold to the Milwaukee Braves. After 2 seasons in the Braves' system, Jim was traded to the Pirates, making his major-league debut in September 1959.

After 2 more seasons bouncing between the Pirates and the minor leagues, Umbricht was selected by Houston in the expansion draft, and spent 2 seasons in their bullpen. 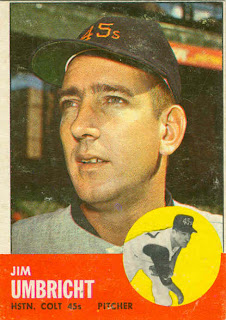 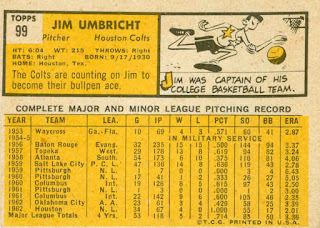 The 1963 season was his last, as at the start of spring training he was diagnosed with melanoma. After surgery in March to remove a tumor, he made it back to the active roster for opening day, and pitched the entire season for the Colts. His situation helped to raise awareness of the disease. Umbricht compiled a 4-3 record over 76 innings in 1963.

His health deteriorated soon after the season ended, and the team released him in December. After being in and out of hospitals for much of the winter, he finally passed away at age 33 on the day before the 1964 season. Jim's body was cremated, and his ashes spread over the construction site for the Astrodome. The Astros retired his number in 1965.


[The Astros' relatively brief history seems to be filled with tragedies. After Jim Umbricht, ex-Astros' outfielder Walt Bond died of leukemia in 1967, a few months after playing for the Twins; pitcher Don Wilson died of carbon monoxide poisoning in the off-season before the 1975 season; J.R Richard suffered a stroke just prior to a game in 1980; and more recently, ex-Astros pitcher Darryl Kile died while a member of the Cardinals.]
Posted by Jim from Downingtown at 11:01 PM

Hey Jim, the back of his '64 card mentions his passing. Other than the Ken Hubbs memorial card can you think of any others like that? I'm sure there have been but I'm blanking.

One of the big card makers (maybe Topps) put out a Cory Lidle tribute card the year after he died in a plane crash.

I remember the Lidle card now. I think Bostock had one too but I may be mis-remembering.