Here's another card donated by the fine folks at Dean's Cards. It's also another from the Athletics' pre-green-and-gold era.

Ed Rakow was signed by the Brooklyn Dodgers in 1957, and had a 4-year tour of their minor-league outposts, including the Green Bay Bluejays and the Montreal Royals. Ed's major-league debut with the Dodgers came in April 1960, but he only played 9 games with them that season, while spending the bulk his time with their triple-A Spokane Indians. 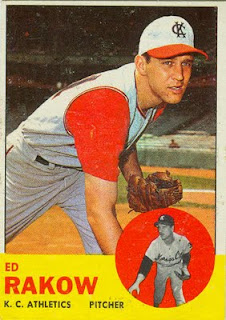 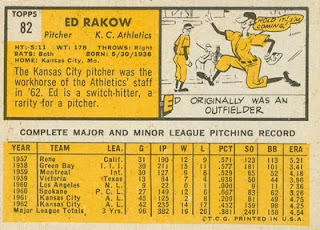 1963 was Ed's last season with the Athletics. His 9-10 record put him in the team's 2nd-tier of starters (along with Moe Drabowsky and Diego Segui), behind 12-game winners Orlando Pena (who lost 20 games) and Dave Wickersham. Rakow pitched in 34 games, but made only 26 starts.

In November, Ed was traded to the Tigers (along with Wickersham and 2nd baseman Jerry Lumpe) for slugging outfielder Rocky Colavito, pitcher Bob Anderson (who never played in the majors again), and cash. Rakow had one solid season (1964) in the Tigers bullpen, then spent most of 1965 and all of 1966 in the minors. He was released by the Tigers in May 1966, and picked up by the Red Sox the same month, but remained in triple-A.