What’s unusual about this card is that it features 2 sets of teammates. 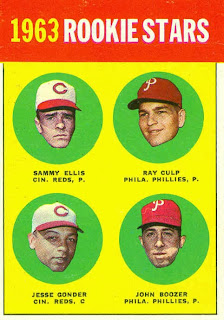 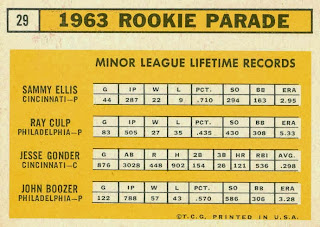 I have already featured all 4 of these players on other blogs, so I’m just going to link them here:

Sammy Ellis played from 1962-69, primarily for the Reds as a starting pitcher.

Ray Culp debuted with the Phillies in 1963. After 4 seasons there and 1 with the Cubs, he played 6 seasons for the Red Sox.

John Boozer bounced between the Phillies and their farm system from 1962-69, as a long reliever and spot starter.

Posted by Jim from Downingtown at 12:12 AM

This card has a varition with the year listed as 1962. Talked about it a bit here

Deal, I remember reading a post about the rookie card variations that year, but I couldn't recall where.