Here's another of the many 1963 cards I received from the good folks at DeansCards.com a few months ago. In the last year or two, I began to collect cards from the pre-1966 era. I still can't get used to seeing the Kansas City Athletics in something other than green, gold and white uniforms!


Ed Lopat is primarily remembered as a starting pitcher for the White Sox and Yankees from 1944 to 1955. He began his pitching career in 1937, and played 7 seasons in the minors before making the White Sox at the start of the 1944 season. Lopat won in double figures in all but his last season in the majors, his best year coming in 1951, when he fashioned a 21-9 record with the Yankees. 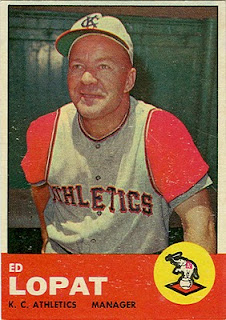 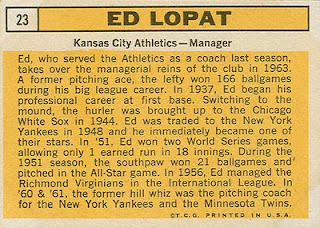 Midway through his final 1955 season, Lopat was traded to the Orioles, and finished out the season in Baltimore. He spent the 1956 season pitching for the Yankees' AAA team in Richmond, VA (at age 38), before embarking on a coaching career.

After several seasons as a pitching coach, Ed took over as Athletics' manager to start the 1963 season. After finishing in 8th-place in 1963, and mired in 10th place by mid-June 1964, Ed was replaced by Mel McGaha. They needn't have bothered - the team still finished in last place, 42 games behind the Yankees, and 5 games behind 9th-place Washington.

I vaguely remember seeing Lopat's name listed in various places as a coach during the 1960s and 1970s, but I don't remember which teams he worked for.
Posted by Jim from Downingtown at 11:23 PM

The non-green and gold uniforms just don't register with me. I'm not old enough to remember the A's in any other color.