This is the final player card for Jim Lemon. He would re-appear in the 1968 and 1969 sets as the Senators' manager.

Lemon was signed by the Indians in 1948, and made his major-league debut in August 1950.  After 2 years in the military, he played for the Indians' AAA team in 1953, while also playing 16 games for Cleveland. In May 1954 he was sold to the Senators, and spent most of that season playing for class-A Charlotte, and 1955 at class-AA Chattanooga. 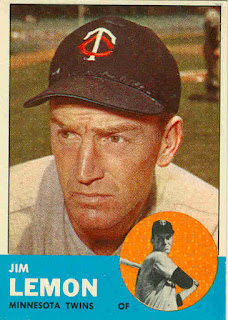 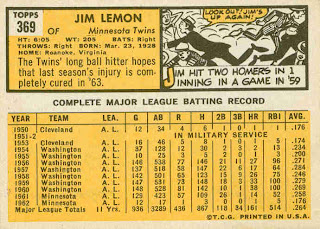 Jim finally gained full-season major-league status in 1956. He spent the next 6 seasons as a starting outfielder for the Senators (although by 1961, they would become the Minnesota Twins). After playing right field for 3 seasons, he moved to left field beginning in 1959. Lemon also made his only all-star appearance in 1960.

Lemon took over as Senators' manager in 1968 (when Gil Hodges went to the Mets). After finishing in 6th place the previous season, the Nats were dead last in 1968. As such, Lemon was canned and replaced by Ted Williams. Both Lemon and Williams have a manager's card in the 1969 set.
Posted by Jim from Downingtown at 12:03 PM