Here is another player unknown to me until today.

Maxwell made the big leagues to stay at the start of the 1954 season. He was Ted Williams' backup in left field, which is to say he rarely played there (12 starts). He did appear in 74 games that season, mostly as a pinch-hitter. After the season, he was purchased by the Orioles, who then sold him to the Tigers by mid-May 1955. 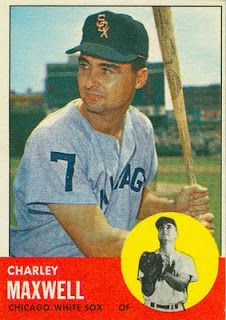 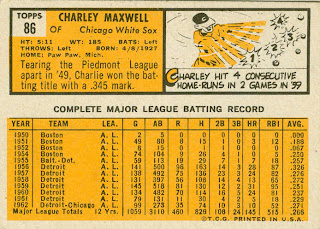 Charlie was the Tigers' 5th outfielder for the remainder of the 1955 season, but took over the starting left fielder's job to begin the 1956 season. Maxwell held the job through the end of the 1960 season. During Charlie's 5 seasons as Detroit's left fielder, he made the all-star team twice.

Rocky Colavito replaced Maxwell in left field at the start of the 1961 season, and after a year and a half of pinch-hitting duty, Charlie was traded to the White Sox in June 1962. Maxwell was Chicago's 4th outfielder during 1962, and started 45 games in left field. He was also the teams' top left-handed pinch-hitter.

1963 was more of the same, except that with the addition of Dave Nicholson to the outfield mix, Charlie was pushed down to the #5 slot. After only 2 pinch-hitting appearances in 1964, Maxwell was released on May 15th.
Posted by Jim from Downingtown at 8:31 PM

Nice to see Maxwell's home was still listed on the card as Paw Paw, Michigan. Growing up in range of WJR radio and Ernie Harwell's broadcasts of Tigers games, I heard him talk often enough about Charlie "Paw Paw" Maxwell. When I got the '56 Strat-O-Matic set, Maxwell's card was one of my favorites.

C6 (or should I call you "Windows Registry"),

Thanks for your comment. It's good to hear from someone knowledgeable about players from the "Original 16" era.

Wasn't one of his nicknames 'Always On Sunday' because he used to hit dingers on Sundays quite often?