Birdie Tebbetts was an old-school manager (which to me is anyone who was out of the managing business before 1967, when I first started collecting cards). 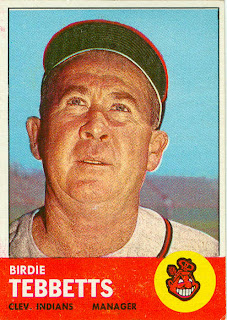 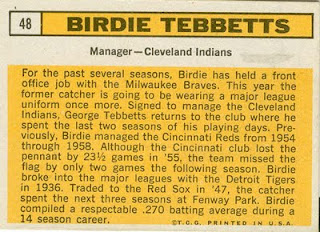 Tebbetts managed the Cincinnati Redlegs from 1954 until midway through the 1958 season, never finishing above 3rd place. He also managed the Milwaukee Braves for the last 25 games of 1961 and all of 1962.

The following season he began his last managerial assignment, managing the Indians from 1963 until midway through the 1966 season. In April 1964 he suffered a heart attack, and missed the 1st half of that season, but returned to his post on July 2nd.

Here are some other stories about Tebbetts from his Wikipedia page:

When he played for the Tigers, he was in the bullpen when a fan, wanting to hide tomatoes, eggs, etc., from stadium police who were combing the stands for unruly fans throwing things, filled a basket with the garbage and threw it over a railing. It landed on Tebbetts' head and knocked him cold. When the police identified the culprit to Tebbetts he said he would handle the matter himself—and busted the fan in the nose.

In 1950 Tebbetts referred to some of his Red Sox teammates as "moronic malcontents" and "juvenile delinquents". Consequently, he was traded to Cleveland at the end of the season.

Perhaps most revealing of Tebbetts's character is his recollection of an umpire who suffered dizzy spells following his return from the war. Afraid of losing his job, the umpire asked Tebbetts, then the Tigers catcher, to help calling balls and strikes, and Tebbetts tipped him off with hand signals following each pitch.
Posted by Jim from Downingtown at 11:20 AM