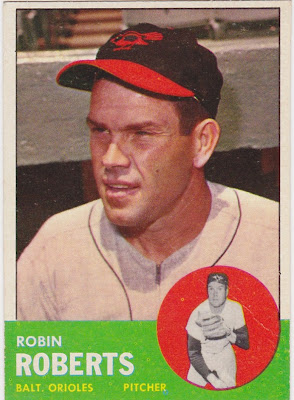 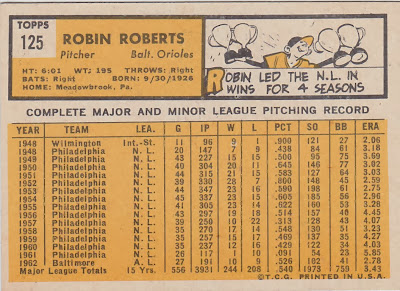 Here we have Hall of Fame pitcher Robin Roberts looking resplendent yet somewhat odd in his orange and black Orioles' cap. Although he pitched three plus years for my Birds and some for the Astros I still have a hard time thinking of him as anything but a Philadelphia Phillie.

For a six year stretch across the first half of the 1950s Roberts was the dominant right hand pitcher in the National League. From 1950 through 1955 he led the league in wins four times, starts six times, innings pitched five times and strikeouts twice.

Roberts was a three sport star playing baseball, football, and basketball for Lanphier High School in Springfield, Illinois. Roberts attended Michigan State on a basketball scholarship, but he also pitched for the Spartans' baseball team. He was signed by the Phillies for a $25,000 bonus, pitched for half a season in the minors, then made his debut for Philadelphia in June 1948.

He was a Phillie for 14 seasons and went 286-245 for teams that more often than not finished well below the .500 mark. He was instrumental however in the Phils' Whiz Kids pennant winning season of 1950. It was his second full season in the majors and he won 20 games for the first time, a feat he'd accomplish six consecutive seasons.

He started Game Two of the 1950 Series against the Yankees and in typical Roberts fashion he pitched all ten innings dueling Allie Reynolds and lost 2-1 when Joe DiMaggio reached him for a home run in the top of the tenth. He pitched one inning of Game Four but never again reached the post-season. He might have had more chances he not been released by the Yankees in May of 1962 after having been purchased in the off-season.

While he was still a productive inning-eater for Philadelphia, Roberts numbers slowly declined over the course of the second half of the decade. A 1-10 record in 1961 brought about his sale to the Yankees who thought his experience would benefit the staff and had several starters who were subject to military call-ups in '62. Rain and open dates and lack of opportunities kept Roberts off the mound and he was released late in April. He had offers from Japan and the Reds but only the Orioles met his salary requests and he signed and pitched for the Birds for three and a half seasons while putting up surprisingly good numbers for a guy with so much wear and tear on his arm.

He was released by the Orioles in mid-season 1965 and moved on to the Astros for whom he pitched a year before finishing with the Cubs in 1966.


Robin Roberts was the ace of the Phillies staff for most of his 14 years in a brilliant 19-season Major League career. The durable workhorse with a superior fastball and pinpoint control won 286 games and compiled six consecutive 20-victory seasons. In 1950, he paced the Phils to their first flag in 35 years with a 20-11 record. A tough competitor, he was a frequent league leader in victories, innings pitched, complete games, shutouts and strikeouts, topping the National League in wins from 1952-55.

Posted by Commishbob at 2:30 AM

I just scored my own copy of this card today, in great condition!