Bob Schmidt was signed by the New York Giants in 1951, and played 2 seasons in the minors before missing the 1953-54 seasons while in military service. He returned for 3 more seasons in the minors, including the triple-A Minneapolis Millers in 1957, where his teammates included Felipe Alou, Orlando Cepeda, Jim Davenport, and Eddie Bressoud. 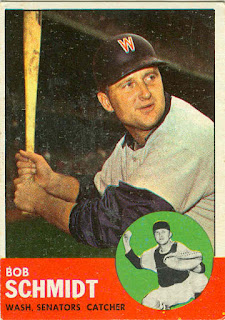 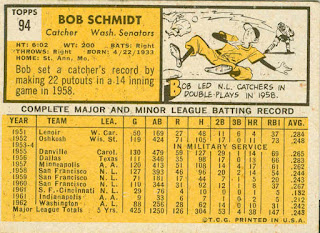 Bob cracked the Giants' starting lineup as a rookie at the start of the 1958 season, starting 107 games behind the plate and making the all-star team. The following season, he alternated with journeyman Hobie Landrith, making 56 starts to Hobie's 88. This arrangement continued in 1960, although Schmidt had the upper hand, starting 98 games.

In late April 1961, Schmidt and 2nd baseman Don Blasingame were traded to the Reds for catcher Ed Bailey. Bob occupied the 3rd-string slot behind rookies Jerry Zimmerman and Johnny Edwards, then was traded to the Senators in the off-season.

Schmidt's playing time increased in Washington, as he shared the job with Ken Retzer in 1962. The following season, the team acquired veteran Don Leppert from Pittsburgh, and Bob's old friend Hobie Landrith from the Orioles. This limited Bob to 9 appearances, and on May 8th he was sold to the Yankees.

I would do it, but unfortunately I only own one 63 card and it's the Schmidt card in the post! So I guess it's a no-go for me. You should just keep it in the event that you grab a few more cards later.

Why not just condense all your blogs into one or two? I have one blog that promotes autograph signings from all the major sports.