Five players made the AL Pitching Leaders card in 1963. The Yankees' Ralph Terry led the league with 23 wins (6 more than teammate Whitey Ford). There was a 3-way tie at 20 wins, and Jim Bunning just squeaks onto this card with 19 wins. (Bunning seemed to make it a habit of winning 19 games - doing so 3 consecutive times while with the Phillies.)

I've decided that I like the 1966 to 1969 style of league-leaders cards much better than these "floating heads" cards in the 1963 set. 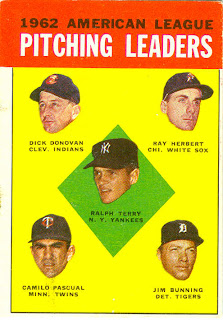 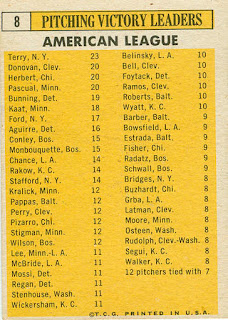 As always, we have the "leaders" list, all the way down to 7 wins!

Curiously, the top three pitchers on this list were all out of baseball 5 years later.
Posted by Jim from Downingtown at 12:33 PM